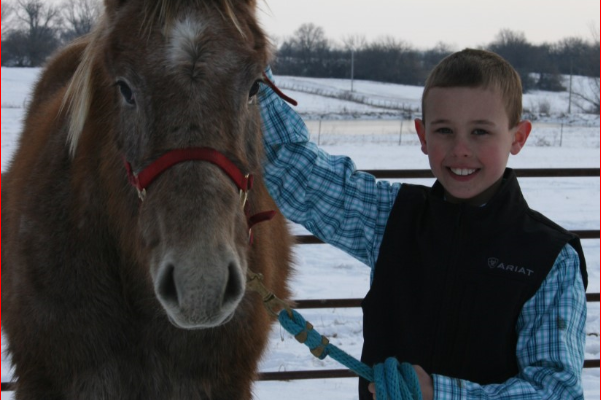 “There’s nothing better for a boy then his own new horse.”

The Leeton, Missouri, fourth grader excitedly wrote the true story about his newfound friend and won his school competition.

A few weeks ago, my dad got a call. The guy on the phone said that if we wanted a baby Quarter Horse colt, he would give us one. So the next day, we consulted over if we should get the colt or not. We finally decided that it would be a great experience for me and my brothers.

My dad and I got in the truck and headed off to Kansas to pick up the colt. It was a long trip, but as soon as we got out of Johnson County it didn’t seem like it would take as long.

After a while, I fell asleep and took a little nap, around 30 minutes. Then I played on my I-pod to pass the time. We passed oil pumps, horses, cows, and many other things. Then my Dad called the guy, his name is Frank, and got some directions on where and how to get to his place.

Just before we got there, we entered the Flint Hills; they were so pretty and cool. There were rolling hills and the trees were changing to fall colors. We also saw little pens on the side of the road where they would round their cows up off 100 to 200-acre farms. The pens, made of metal and rock, were to send them on and off trucks to different farms.

Finally, we saw the farm where Frank lives with his wife Mary and our soon to be new colt. We decided that we would go on into town for a snack and then we would come back to get the colt. We had to make it quick, because we would have a choice on what colt we got. I definitely wanted to be able to pick the colt I wanted.

After a few minutes, we were pulling into the farm. There was a red and white barn, and we could see a few horses in the field. When everyone arrived at the farm, we were the second to pick out our colt.

We decided on the gray stud with a small star on his head. We also liked that he had a long mane compared to the others. We got him sorted from the rest of the colts and into the trailer without much trouble. We then thanked Frank for our new colt and headed out.

We decided we were going to take the four-lane highway back home. On the way home, I did the same thing I did on the way there, played on my I-pod and took several naps. Then we got home and put the colt in the pen. We went in the house and went to bed; we had a long day.

After a month, we started training the colt. He is halter broke and a lot calmer than when we first got him. He also has a name now: Bennett. It took me a while to pick out his name, because I wanted it to be perfect. He is such a good colt and we love him.  He’s our baby now, and he will be forever.

Conner won first place in the school’s Young Authors Contest with his assignment to write a story using details. He will be honored at the University of Central Missouri, in Warrensburg, Missouri, on April 13. The writing will be published, and Conner will have an opportunity to meet other children authors.

They live on a farm purchased from Amanda’s grandparents in 2006. Although the family lives in the Leeton School District, the physical address is Warrensburg, Missouri. “Our kids will be third generation graduates of Leeton High School,” Mom Amanda noted.

“Conner would have an entire herd of horses if he could,” Amanda said. “He has an absolute love for horses. Conner rides as much as he can, with his dad John the most. John has ridden from a young age. I’m sure that’s where Conner got his love for horses and to ride.”

No end to Conner’s adoration for his horses. He’s been found in the barn with a hair dryer to keep his horses warm and dry during the winter.

“Jango is his love,” Mom revealed. “They have a bond that is hard to explain, but it’s definitely something.”

As would be expected, a cowboy and his horses have cattle. The family operation features 70 stock cows as well as row crops including soybeans and corn. Conner has his own cattle herd, too. “He recently bid and bought seven older cows at the Windsor Livestock Auction,” proud Mom related.

Actually, Conner is a diversified stockman. With horses and cows, he also  has chickens, rabbits, and annually raises a pig to show as his 4-H fair project.

Growing his own garden, Conner does his chores daily to make sure his animals are fed, watered and taken care of. An entrepreneur, “he runs his own small egg business, selling eggs to our neighbors and friends out of John’s shop,” Mom said.

As if all of that doesn’t keep any cowboy busy, Conner definitely works hard excelling in the classroom, getting straight “A’s” He had an “Advanced” score in recent statewide English Language Arts testing.

Little brothers “have a love for the country life, too,” Amanda said. “Colten does ride from time to time, but he’s more into sports. He’d rather be on the baseball field or basketball court.”

Carter likes to feed cows and farm with his dad. Still a little young at this point, Carter also enjoys riding horses some.

Looking forward to caring for, showing and then riding Bennett, “Conner is sure proud of his little colt,” Mom Amanda assured.