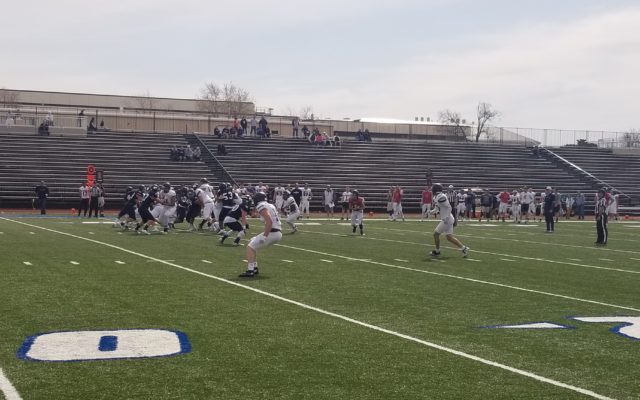 The Ichabod football team wrapped up their 2019 spring football campaign with their annual spring scrimmage on Saturday, April 6th.

There were red zone periods, backed up, two minute drill, all types of game like situations.

Some of the scrimmage was full contact and tackle to the ground, other portions were just touch the ball carrier to ensure safety of the players.

Junior quarterback Mitchell Schurig was out with the first team offense as the quarterback. Schurig started the last 7 games of the season in 2018 and will be the starter going into fall camp.

Schurig was excited about the scrimmage and thought several key players stepped up to earn playing time or competing for a starting spot.

The Ichabods are looking to bounce back after a 5-6 season a year ago.

Several players are back practicing after spending some or most of the 2018 season injured including wide receiver J.J. Letcher is back healthy after a hand injury in the season, Zach Willis is back at the starting running back spot after dealing with a knee injury.

Everyone should be healthy for 2019 as Schurig says the team suffered just one bad injury, a knee injury to Terrell Cooper, othewise it is just other small injuries that shouldn’t effect 2019.

Listen below to several players recapping the spring season and what Head Coach Craig Schurig had to say.