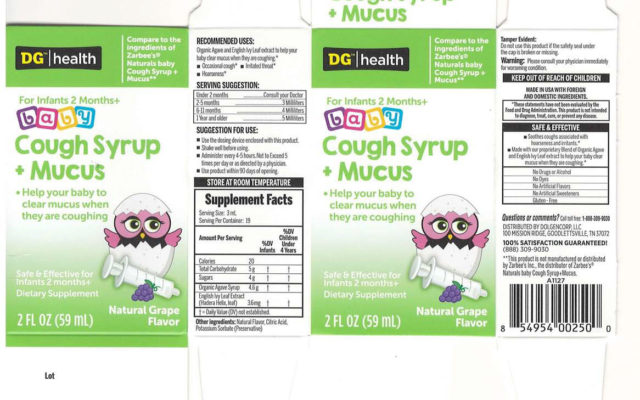 Kingston Pharma LLC is recalling bottles of DG(TM)/health NATURALS baby Cough Syrup + Mucus because it has the potential to be contaminated with Bacillus cereus/Bacillus circulans. Those bacteria have the potential to produce two forms of gastrointestinal illness, according to the Food and Drug Administration.

The product was distributed nationwide in Dollar General retail stores. The product comes in a carton labeled DG™/health baby Cough Syrup + Mucus in 2-fluid ounce bottles marked with Lot KL180157 Expiration date 11/20 on the bottom of the carton and back of the bottle label; UPC Code 8 54954 00250 0.

Production of the product has been suspended while FDA and the company continue their investigation as to the source of the problem. If you have an affected bottle, take it back to your Dollar General. They’ll refund your money.