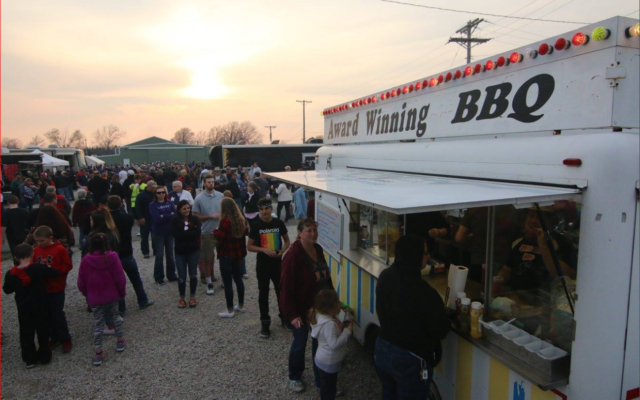 “There’s going to be lots of smoke in the air.”

It’s the 16th annual Smoke in the Spring State Barbeque Championship, April 12 and 13, at Osage City.

“At Jones Park, there’ll be a full slate of activities for everybody,” announced Corey Linton. “But good eating of the most distinctive smelling gourmet will be the highlight for most.”

As the event coordinator and dedicated enthusiast, Linton is director of the Osage City Parks & Recreation, barbecue championship sponsor.

“Over the past 15 years, Smoke in the Spring has expanded into one of the Midwest’s premier barbecue contests. There’ll be teams and judges from 20 states as far away as Hawaii,” Linton said.

Sanctioned by the Kansas City Barbecue Society (KCBS), Smoke in the Spring is designated the state championship. More than $25,000 will be awarded in prize money.

This year, the competition received a 2019 Smokin’ with Smithfield Grant of $3,000 to go towards awards.

“Smithfield had hundreds of nationwide applicants and only picked 33 contestants,” Linton said. “Plus, Q-39 owned by Rob Magee also pledged $3,000 to this year’s contest.”

“Rob was a competition barbeque contestant prior to opening his restaurants in Kansas City,” Linton said. “Smoke in the Spring was Rob’s first of 50-plus team grand championships.

“He still keeps track of when our event is each year to visit,” Linton added. “I’m honored to have Rob associate his restaurant with our competition, considering there are so many Kansas City Metro contests.”

With 105 teams signed up to compete, it’s three years in a row with more than 100 entries. “We are affectionately known now as the Little Royal,” Linton said.

Smoke in the Spring got its start in 2003, and has gradually gained competitors every year since then.

“It’s an entire Osage City community event that all from far beyond can support and embrace,” Linton recognized.

“Our goal is to annually offer participants, judges, sponsors and the public the very best barbecue competition possible,” he added.

In addition to selection of grand and reserve grand champions, and the brisket winner, there’ll be several more awards.

Top entries will also be recognized in chicken, ribs, and pork butt divisions. Then winners are to be selected in Cook’s Choice, Dessert, and two Kids-Q categories, as well.

While barbecue is featured, the Taste of Osage City offers the chance for others to taste what’s cooking. “Everybody is invited to this Friday evening’s sampling barbecued meats from Smoke in the Spring, at 5 o’clock,” Linton welcomed.

Beginning at 4 o’clock, there’ll also be inflatable bounce houses for kids up to 14. Chance Encounter from Topeka will entertain with ’80s and ’90s party rock and guitar chaos at 8 o’clock. A fireworks show, at 9 o’clock, is to be presented by Garrett’s Fireworks of Osage City.

“There’s no charge for the music, dancing, bouncing, or booming,” Linton said.

Among competitors will be some “top guns” in the barbecue circuit. “They’ll be vying to rack up points with wins early in the season at Smoke in the Spring,” Linton noted.

Registered to compete this year is the reigning Smoke in the Spring grand champion Hogline BBQ, from Owatonna, Minnesota.

Last year, 46 of the 100 teams at Osage City went on to win grand, reserve or class championships. “We not only have a large group of teams, but the quality of teams is outstanding,” Linton added.

The cooker coming the greatest distance to compete at Smoke in the Spring is T-Mac Smokin’ from Sturgeon Bay, Wisconsin. That’s 758 miles from Osage City.

“While the public is not involved in Saturday’s competition,” Linton said, “all are welcome to walk through the park.

“They can observe the cookers at work, being mindful that a contest is going on,” Linton noted. “Competitors should not be disturbed or interfered with.”

During the barbecue, celebration continues in downtown Osage City with the Cruis’n and Cook’n Car Show.

In the past, there’ve been more than 300 antique and classic cars, trucks, vans, street rods, rat rods, and motorcycles. “The show is free for spectators who are invited to enjoy the day in Osage City,” Linton welcomed.

“Search Smoke in the Spring’s Facebook page for a team map, list or Taste of Osage City menu,” Linton advised.