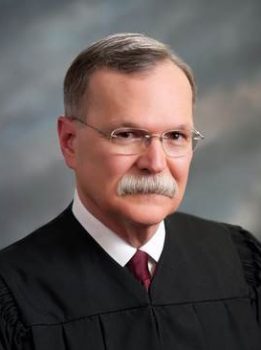 In his annual State of the Judiciary speech Wednesday afternoon, Chief Justice Lawton Nuss took a different approach than he has in previous years and was brief in his financially related comments.

“For our 167 district court judges, in pay, they now rank dead last in the entire country among their fellow trial judges,” said Nuss. “We are 51st, behind all the states and the District of Columbia. That is even after the pay increases the legislators provided the last two sessions, for which we are grateful.”

Nuss said he is unaware of any other group of Kansas state employees where that group ranks dead last in pay compared to the other states.

That means about 12 percent of all the district court judges in the state were looking for a pay bump hard enough to apply for a new job. Nuss left those pieces of information without further context for his audience.

“I will let you connect the dots between them,” said Nuss. “You can perform your own analysis of the consequences that this level of judicial pay can and will have on providing justice in Kansas.”

As will be true of the entire budget save K-12 education, it’s likely that the final numbers allotted to the judiciary won’t be set until after the new revenue estimates are given in April.