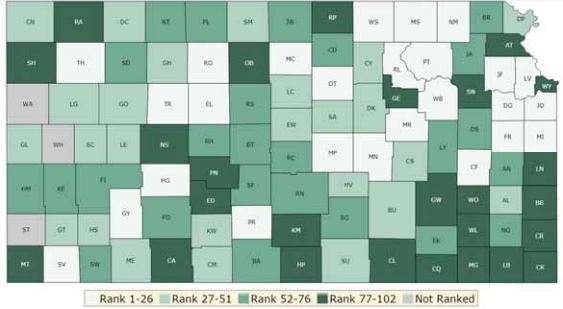 The Robert Wood Johnson Foundation (RWJF) and the University of Wisconsin’s Population Health Institute (UWPHI) released their annual rankings on Tuesday of the health of nearly every county within each of the country’s 50 states.

“Some of the measures that we look at include individual behaviors, clinical care, social and economic conditions, including things like child poverty or high school graduation rates as well as the physical environment,” said Katie Wehr, Senior Program Officer with the Robert Wood Johnson Foundation. “We look at over 30 measures and rank both health outcomes, how healthy people are, as well as health factors, which is really a snapshot of what tomorrow’s health might look like, recognizing that there are a lot of elements that contribute to how well or how long we live.”

This year, the Rankings explore how our homes link to our health and opportunity to be healthy.

On average, people in the worst county have a little more than one more poor health day per year than those in the best county.

In 2017, in Kansas, more than 100,000 children lived in poverty. Housing contributed significantly to that, as 46 percent of those children in poverty were living in a household that spends more than half of its income on housing costs. For a full breakdown of how your county did, go to countyhealthrankings.org. Three Kansas counties did not participate in the measurement.