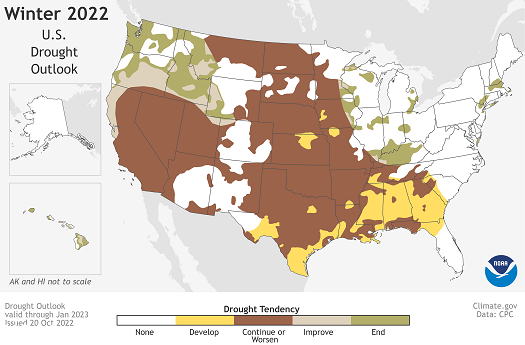 This year La Niña returns for the third consecutive winter, driving warmer-than-average temperatures for the Southwest and along the Gulf Coast and eastern seaboard, according to NOAA’s U.S. Winter Outlook released today by the Climate Prediction Center — a division of the National Weather Service. Starting in December 2022 through February 2023, NOAA predicts drier-than-average conditions across the South with wetter-than-average conditions for areas of the Ohio Valley, Great Lakes, northern Rockies and Pacific Northwest.

NOAA forecasters, in collaboration with the National Integrated Drought Information System (NIDIS), continue to monitor extreme, ongoing drought conditions that have persisted in the Western U.S. since late 2020, as well as parts of the central U.S. where historic low-water conditions are currently present.

“Drought conditions are now present across approximately 59% of the country, but parts of the Western U.S and southern Great Plains will continue to be the hardest hit this winter,” said Jon Gottschalck, chief, Operational Prediction Branch, NOAA’s Climate Prediction Center. “With the La Niña climate pattern still in place, drought conditions may also expand to the Gulf Coast.”