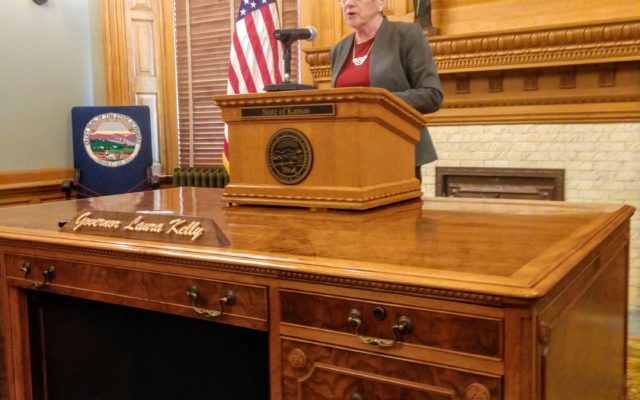 On behalf of thousands of Kansans struggling to secure affordable healthcare, Governor Laura Kelly held a press conference this morning calling on the Kansas Senate leadership to allow a vote on Medicaid expansion this week.

“By design, the legislation I presented was very similar to a plan that passed the legislature in 2017 with strong bipartisan support. That’s why I’m disappointed with Senate leadership for blocking the debate and the committee process,” Governor Kelly said. “Now with the regular session winding down, “halfway there” isn’t good enough.”

“I have always endorsed efforts to carefully study issues before taking action,” Governor Kelly said. “But when it comes to Medicaid expansion, “study” is a code word for “stall.” The House did what’s right for Kansas – I’m calling on the Senate to do the same.”

During the press conference, Governor Kelly outlined the timeline of Medicaid expansion in recent years. In 2011, Governor Sam Brownback asked Kansans to wait until after the 2012 Presidential Election to act on Medicaid. After the 2012 election, Kansas still failed to act. Brownback then insisted Medicaid could not be expanded until the Supreme Court ruled on the constitutionality of the Affordable Care Act (ACA). The Supreme Court upheld the ACA in 2015. Kansas still did not act. When the Legislature overwhelmingly approved Medicaid expansion in 2017, Brownback vetoed the bill.

By not expanding Medicaid, Kansas has forfeited over $3.2 billion of our tax dollars to other states. The economic benefits of expansion have been clearly documented. The governor noted in the press conference that there have been 300 published studies and reports on the positive impact of Medicaid expansion in other states, including:

· A growth in the number of healthcare related jobs, spurring economic growth;

· A significantly lower level of uncompensated care for health facilities.

Medicaid expansion passed the Kansas House of Representatives on March 21. The governor released her plan on January 29, 2019. Neither chamber held hearings on the bill or scheduled a floor vote.

In her own press event also held on Tuesday, Republican Senate President Susan Wagle suggested that more study needed to be done on the issue and that she would talk to leadership about how best to proceed with that, but that as of the event Tuesday morning, it was her intent to study the issue in the summer, though some have suggested that study should happen between the regular session and the veto session in May.