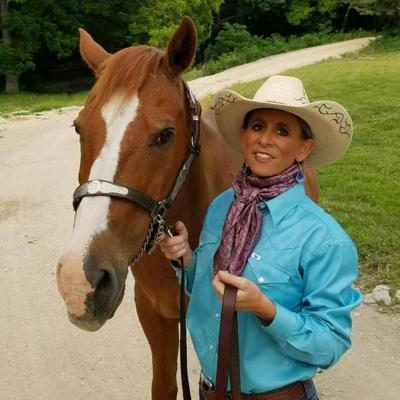 If it has anything to do with horses there’ll most likely be something there about it some way shape or form.

That’s not a short description but surely a most accurate one for the upcoming EquiFest of Kansas.

Furthermore, often days gone by more than today, certain prejudices have existed among horse folks, despite common affection all things equine. Maybe, the rodeo jocks snide halter leaders, barrel racers shun flat seat riders, all race horses do is run. Doesn’t seem that way nowadays as everybody’s eager for what’s best of the horse doing everything the best as possible.

“Well, EquiFest has three full days of everything, horse February 22-23-24, at the ExpoCentre in Topeka,” according to Justine Staten. “It’ll sure be the greatest Kansas horse extravaganza yet.”

So what’s on the schedule? Just about too much to list everything. Briefly, there’ll be clinicians, workshop speakers, shopping, art, poetry, kiddie corral, horse shoeing, a painting horse station and much more.

The Tim Trabon Memorial Ranch Rodeo Friday and Saturday evenings will feature 14 teams of working ranch cowboys. “They’ll be competing in events simulating what they do every day in their cowboy profession. There’ll be roping, tying, sorting, loading and milking,” Staten said.

Equestrian drill team demonstrations and competitions are scheduled. “Three teams are to compete in a precision pattern, a patriotic demonstration and also a freestyle finale,” Stated verified.

The Carriage and Driving Society of Greater Kansas City will sponsor the EquiFest Driving Derby. “Ten competitors will vey for fastest time on the course,” Staten commented. “They’ll sport colorful attire for the speedy action driving several different breeds of horses from Miniatures to giant Percherons.”

Horse shoe forging demonstrations, competitions and live horse shoeing are to be presented by the Kansas Farrier Association.

Again, a horse judging contest has been planned for youth teams with competition typically drawn from around the state.

What makes EquiFest especially appealing for everyone is that many equine breeds will be in attendance. “Each breed organization will have will display in the Breed Showcase and present daily public demonstrations,” Staten related.

With all the attractions, shopping is still often considered the biggest part of EquiFest, Staten admitted. “If it can be used for a horse, or by any equine enthusiast, there’ll be commercial displays,” she said.

Mustang Maddy is renowned for her work with mustangs. “She’ll present steps of communicating with horses to work at liberty,” Staten said. “Her trained zebra is also always a highlight of Maddy’s programs.”

An accomplished rider of hunter and jumping horses, has a background in education and sports psychology. “She’ll take the audience through steps to achieve confidence while managing mind over matter,” Staten said.

“Remember children 12 and under are admitted free to all EquiFest features,” Staten said. “It costs for adults to attend, but advance wristband purchases offer generous savings over buying at the EquiFest door.”

Complete details and program lineup can be found at www.equifestofks.com.