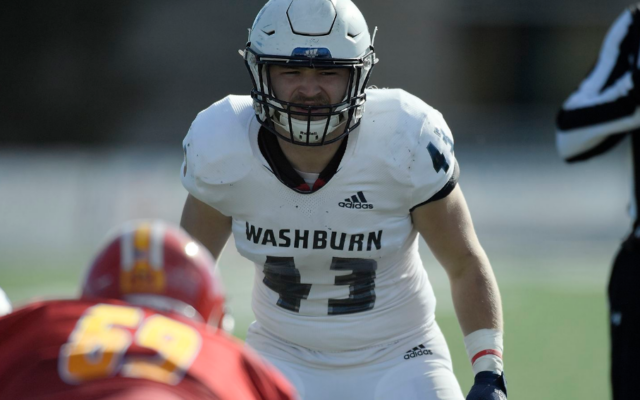 The Ichabods scored first on a six-yard touchdown pass from Jared Taylor to James Letcher, Jr. to go up 7-0 following the extra point by Kameron Lake with 1:57 to play in the opening quarter. The five-play scoring drive was set up by a Micah Skebo interception return of 42 yards down to the Missouri Southern 26 setting the Ichabods up just outside of the redzone.

After the Ichabods forced a Lion (4-7, 4-7 MIAA) punt on their next drive, the Ichabods marched 65 yards in 13 plays when Tyler Bowden scored from two yards out pushing the lead to 14-0 with 9:28 to go in the first half. On the Lions’ next drive, after the Ichabods tried an onside kick, the Lions scored on a 43-yard touchdown pass cutting the Ichabod lead in half at 14-7.

It only took six plays for the Ichabods to go back up two scores when Taylon Peters scored on a 4-yard run as Washburn stretched its leads back to 14 at 21-7 midway through the second quarter with the final points of the first stanza.

On the Ichabods’ first drive of the second half, after an Ichabod punt, the Lions returned Jake Zeller’s punt 83 for a touchdown as the Washburn lead shrunk to 21-13.

Washburn’s next drive failed to produce a first down, but after Zeller’s punt to the Missouri Southern 7-yard line, Washburn’s Caeden Spencer blocked the Lions punt for a safety and a 23-13 Ichabod lead.

After the free kick by the Lions, Peters scored his second touchdown of the day on a 24-yard run building a 30-13 lead with 6:17 to play in the third quarter.

The Lions scored with 12:46 to play in the game pulling back the Ichabod lead to 10 on a 1-yard score and on the ensuing Ichabod drive, they were picked off in the endzone returning possession to the Lions with 6:57 to go.

The Ichabod defense held the Lions to a three-and-out setting up an 89-yard punt return by Letcher off of a 71-yard Missouri Southern punt. The score was Letcher’s second punt return for a touchdown and his fifth overall in an Ichabod jersey as Washburn pushed out to the 37-20 lead finishing off the scoring in the game.

Peters finished with 83 yards on 19 carries and the one score while Taylor was 16 of 22 passing with two touchdowns and 215 yards. Letcher had six catches for 71 yards and one score.