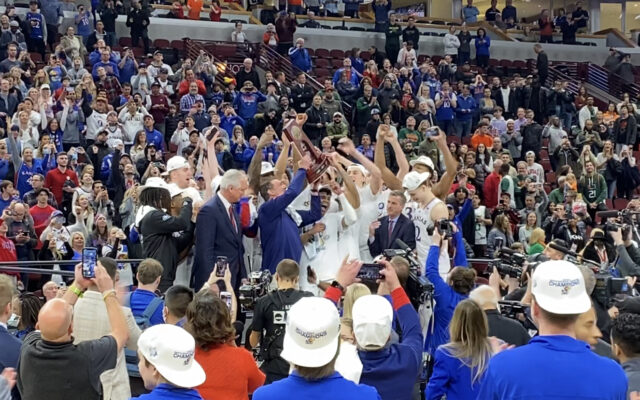 CHICAGO — The Kansas Jayhawks are headed back to the Final 4 for the fourth time under coach Bill Self after blowing out the Miami Hurricanes in the Elite 8 76-50.

It was the second half, in particular, when KU took control of the game and tore Miami apart. After trailing by six points at halftime, the Jayhawks utterly dominated following the break to the tune of a 47-15 second-half advantage.

“A tale of two halves, obviously,” Self said. “We weren’t very good the first half and played tight a little bit and couldn’t guard [Kameron] McGusty. And for whatever reason, the lid came off the second half and the intensity picked up defensively and then we had about two good plays turn into four, turn into eight, which turned into 16. That was about as well as we could play the second half.”

Kansas' 26-point win over Miami was the largest margin of victory in any Elite Eight game since 1992.

In the second half, Kansas shot 59.3% from the floor and 55.6% from three-point range. That came after shooting under 42% in the first half and not making a single three before halftime.

The second-half run for the Jayhawks started immediately out of the break. By the first media timeout of the second half, KU had erased the deficit and surged ahead with an 18-5 run.

Senior forward David McCormack was the catalyst for the strong second half, including an and-one basket that got both the Jayhawks and their fans in the United Center fired up.

“I think it was a big momentum changer just getting an and-one basket and trying to get them in foul trouble as well, that changes the momentum and how they would need to guard us,” McCormack said, adding: I just know it pumped energy into the bench and everyone on the court which makes us guard better, move faster. It just helped the team all around.”

Junior guard Christian Braun also played a key role in unleashing the KU offensive attack. After passing up several open looks from three-point range in the first half, he knocked in the Jayhawks’ first make from deep with 15:27 to play, a shot which put Kansas ahead.

“When I hit that three it was a big confidence booster for me and I’m sure for the rest of the team,” Braun said. “We just needed some energy, I thought we were flat in the first half. That shot and the dunk, I know it helped me and I think it helped the team just get going.”

The dunk Braun referred to was one he made one possession earlier, which tied the contest.

Four Jayhawks finished in double figures in the win, led by 18 points from senior guard Ochai Agbaji. McCormack added 15 while shooting 6-of-7 from the floor, with Braun contributing 12.

Agbaji’s big day scoring was a welcomed sight for Kansas after he had struggled shooting the ball for the last several games. Self, who was already complimentary of the consensus All-American’s contributions when he wasn’t scoring, said he thinks Agbaji’s confidence from Sunday will carry over to the Final 4.

“Ochai has carried us all year long,” Self said. “And for him to not get 20 or 22 in a game does not mean he’s in a slump or anything like that. He has labored offensively, I think in large part because of how people have defended him. And maybe we haven’t done a good job getting him the ball. But I know now after the way we played the second half, he’ll be full of confidence moving forward.”

For as well as the Jayhawks played in the second half, the Hurricanes played equally as poorly. Miami shot just 21.4% overall in the second half and went 0-13 from three. Even with KU’s bad start from beyond the perimeter, it still finished with better shooting numbers than Miami.

“I don’t know what the run was, but we were never able to answer their scoring runs,” Miami coach Jim Larrañaga said. “And as a result, I think we had 36 at halftime and only ended up with 50 points. So the tale of two halves. We did a great job in the first half, and they did an even better job in the second half.”

The Jayhawks cleaned up after the game, too, with three players receiving all-region honors for the Midwest. That included McCormack, Braun and senior guard Remy Martin, who was named the Most Outstanding Player of the Midwest region.

Sunday’s game was the first time Martin was held to single digits in scoring since the first round of the Big 12 Championship tournament, but he still found a way to make an impact. His six first-half points kept KU afloat when the rest of the team struggled, and he also grabbed six rebounds in the win.

The Most Outstanding Player of the Midwest Region, Remy Martin, sharing a moment with Reggie Miller #kubball pic.twitter.com/tMiy82PIn7

He has neglected the spotlight whenever possible during the postseason run, something he did again after the Elite 8, even with Kansas fans in Chicago chanting his name when he was named the region’s Most Outstanding Player.

“Obviously, it feels great,” Martin said. “But my teammates, man, it’s really my teammates and coaches just sticking with me through ups and downs. And just instilling more confidence in me. And it’s all credit to them. I didn’t really know that I won. When they said my name, I didn’t know that’s what it was for.”

With the win, Kansas is headed back to the Final 4 for the first time since 2018. And, just like that year, the Jayhawks will play the Villanova Wildcats in the national semifinals. KU is already favored for next weekend’s matchup against a Villanova that will be without one of its best players, Justin Moore.

That matchup looms large, but for now the celebration is on for Kansas. After scratching and clawing through two and a half games and facing a halftime deficit in the Elite 8, the Jayhawks are riding into the biggest weekend of the year off maybe their best 20 minutes of basketball all season.

“These guys earned it,” Self said. “So I’m so proud of them and proud for our program. And we need about four days off. Can’t wait to get to New Orleans.”

Click below to hear what Bill Self and the Jayhawks had to say about beating the Miami Hurricanes 76-50 and advancing to the Final 4.