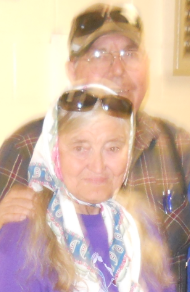 “We sold the farm, but still live here; that was part of the agreement.”

Larry and Elsie MacArthur pride in their lives on the farm southwest of Richmond in Franklin County.

“I’m 81, and Elsie’s 78,” Larry continued. “We’ve slowed down. You’d have to say pretty much retired, getting about that time.”

Most proud of his lifetime profession, a farmer, MacArthur has sure seen transition in the business.

“I remember helping Dad shuck corn by hand when he was farming near Belvue,” Larry smiled fondly. “I’d get to drive the horse and wagon to the field on that bottomland Kaw Valley farm. Then the horse knew when to stop and go upon command.”

When corn pickers came into use, there were always a few small ears and stubs left behind. “I’d help Dad pick them up and use money from that for an Outdoor Life subscription. We both liked the magazine,” MacArthur reflected.

His dad won the corn yield contest one year. “I think that was 1947. It seems like he may have had 70 bushels an acre, uncertain, still would have been a lot back then. I don’t know what seed cost, but not much compared to nowadays,” Larry noted.

Still, cattle looked profitable to Larry’s dad at one point. “He bought feeder calves high, they gained well, but the market went down, and he sold them low,” MacArthur remembered.

“It was the same experience my grandfather had,” Larry continued. “Their calves broke even, didn’t lose necessarily, but they both could have sold the grain instead and made a profit.”

That made a lifetime impression on Larry. “I’ve never been in the cattle business, always stuck to crop production,” he said.

The family farming operation moved to south of Ottawa in Franklin County during Larry’s teenage years.

Earning a scholarship to attend Ottawa University, MacArthur envisioned being an engineer designing roads and bridges. “I had to take a whole bunch of tests, and more tests,” Larry recalled with a frown. “There were lots of math questions, and I just didn’t do very well on them.

“The college professor said he appreciated my ambition, but being an engineer pretty much required making calculations,” MacArthur reflected. “He said it’d be pretty hard for me to be a successful engineer. I was already a farmer, so that’s what I did, been farming all of my life.

“Now, Elsie and I’ve farmed this place near Richmond since we got married,” he tallied.

That’s been more than four decades.

“It’s a half section,” Larry said. “We grew wheat, corn, soybeans; tried milo but it was itchy like oats, so got away from that.”

Closely monitoring prices, some grain would typically be sold at harvest, with additional put in the bin. “It’s always been difficult to know how to market, when to sell, or store,” Larry admitted.

A fulltime farmer, Larry said, “Oh, I’d take an odd job to help somebody sometimes, but basically my own farming. I did hire custom workers occasionally, during harvest and the like.”

As technology changed MacArthur made transitions as well. “I always had lots of equipment; was probably overpowered with tractors,” he evaluated. “Had John Deere’s, 4010, 4020, 4415 and 5020; the farmer who bought the land wanted the 5020, so I sold it.”

Most of the modern equipment line remains under MacArthurs’ ownership. “I’ve sold some pieces, and I’ll sell more if somebody comes along and makes a good offer,” Larry said.

The MacArthurs have a daughter and two granddaughters. “Elsie has always been a farm housewife,” Larry credited. “She enjoys it, is a good cook and I like to eat. Elsie bakes bread, cinnamon rolls, and does quite a bit of canning.

“She’s always had a garden, grows a lot of our food. I help out with the hoeing sometimes,” MacArthur grinned.

“Elsie really has a knack for sweet potatoes, which come to find out are one of the most nutritious foods. Better than Irish potatoes, less carbohydrates which can cause high blood pressure, I guess. I really like sweet potatoes now too,” he added.

When the couple had an opportunity to sell the farm ground, they insisted they had to keep their home.

“We hear about farm couples who retire, move to town and often don’t live long. We didn’t want to be like that,” Larry said. “This works well for us. We try to walk from half-a-mile to two miles every day.”

Always hand in hand strong affection most apparent. “Walking helps keep us spry and we can check on the crops in the area while we’re at it,” he continued. “There’s lot of good scenery around here to enjoy. The neighbor across the road raises pheasants. We like to watch them, especially when one gets out and comes to visit.”

Larry had a computer. “I learned how to us it, but then the bill went up, and I canceled. I depend on newspapers and radio for my news,” he said.

In the past dozen years, the MacArthurs have only missed one WIBW Farm Profit Seminar. “It doesn’t matter where they are we go, but the snow kept us home that time,” he said.

Always early to rise, the MacArthurs tune in to 580 WIBW. “The Wall Street report at 4:10, is followed by the Ag Roundup. We wake up to listen to them,” Larry said.

They’ll be at the Farm Profit Seminar in Alma Wednesday evening, Feb. 6.