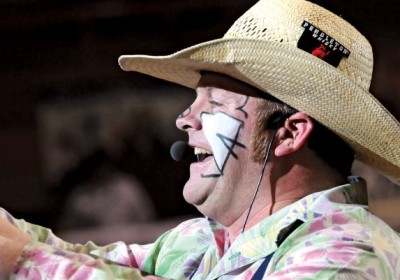 Rumford had been sidelined after having left knee surgery February 7, by Dr. Chris Miller in Wichita.

The Professional Rodeo Cowboys Association (PRCA) has honored “Rumpshaker,” his arena moniker, as Clown of the Year for the past seven years.

Also honored with the PRCA Coors Man in the Can award in 2013, 2015 and 2018, Rumford injured the knee January 26. That was while performing at the National Western Stock Show and Rodeo in Denver.

However, Rumford went on to work the rodeo in Rapid City, South Dakota, January 25 through February 2.

“I had an MRI when I got home and Dr. Miller, the orthopedic surgeon, said we have to fix this right away,” Rumford related. “If we waited until the fall there would be nothing left to fix.”

At Denver, the clown was doing a new act with a miniature fighting bull. “I jumped him, was fighting him, and making some rounds,” Rumford remembered.

“I went to throw a back fake and stepped in a hole in the arena dirt at the Denver Coliseum. When I stepped in the hole, I evidently blew my whole knee out.”

At Austin, Texas, Rumford, 38, was able to walk and talk and do his acts that don’t involve jumping.

“I just will not be able to work the barrel for a while,” the honored barrel man said. “I still have a lot of acts I can do without having to run.

“I think by mid-April I should be back to my old self. My physical therapist was amazed at how strong my legs are,” the entertainer said. “I plan on clowning for a long time and I’m going to come back stronger than ever.”

Rumford blew his right knee in 2004, while steer wrestling at the rodeo in Greeley, Colorado.

Obviously, “Rumpshaker” was twice as happy as the rest of the winners at the PRCA’s 2018 annual awards banquet in Las Vegas December 5. He had assistance from his wife Ashley carrying the Clown of the Year and the Coors Man in the Can awards.

Rumford, a third-generation cowboy now living in Ponca City, Oklahoma, started competing as a youngster growing up in Abbyville.

His grandfather, Floyd, founded Rumford Rodeo Company. Bronc, his dad and an all-around cowboy, took over the stock contracting firm, and Justin joined in the family business.

In his lifetime, “Rumpshaker” has done just about everything possible in the sport. But, he’s found his calling dressed in baggy clothes and wearing greasepaint. It’s the perfect combination of a witty personality raided on rodeo.

“People like chubby guys like me, we’re funny,” Rumford laughed. “I think people like my comedy because I don’t make fun of anyone or do anything controversial. I just am myself.

“It’s pretty cool is all I can say. This clowning deal is the best thing I’ve ever had. I enjoy it so much,” Rumford declared.

That shows in and out of the arena. Rumford has roped and wrestled, ridden bucking horses and fought bulls. He’s been a flank man and a truck driver.

“A few years ago when I started this clowning entertaining venture, I knew if I really worked I could make it.”

In just his second year as a fulltime rodeo clown, Rumford won the PRCA’s top award. He continues to be one of the most sought-after rodeo clowns in the game for many reasons.

“I have seven acts,” Rumford said. “At a lot of rodeos, I work there are several performances, so I like to change it up. I’m not a specialty act; I’m a clown act.

Whether it’s “Fat Elvis” on a mini bike or the Rumford rendition of Spiderman, the acts are a big part of the entertainment value.

If there is any downtime in the competition, Rumford is on hand to engage the crowd.

“I think my specialty is walking and talking and being in the arena,” he said. “I feel like I can connect with the crowd pretty good. Even when my microphone isn’t on, I’m still talking to fans. You can do a lot without saying a word.”

That’s sharing a particular move or a flashing glance in the right direction.

“People want to laugh at each other more than they want to laugh at something,” Rumford said. “When I’m in the arena, I’m saying the same stuff I’d say if I wasn’t clowning. It’s just me being me.”

Still, comedy is serious business, so he does his homework.

“I watch a lot of ‘Saturday Night Live’ and movies and Google stuff to find things that people will enjoy,” Rumford said. “The more rodeos I get, the more I want to do good.

“I totally adjust everything,” he said. “You don’t want to push somebody on what they want to hear. When you’re in die-hard rodeo country, you have to feel it out and see what happens.”

Justin and Ashley, Miss Rodeo Oklahoma 2005, became parents to a set of triplets in September 2013. They have two daughters, Livi and Lola, and a son, Bandy. Now the family travels the country together in their toy hauler trailer.

Rumford’s goal is to make people laugh and enjoy the rodeo away from stresses of everyday life. His motto is “If you’ve had a good time, then I’ve done my job.”