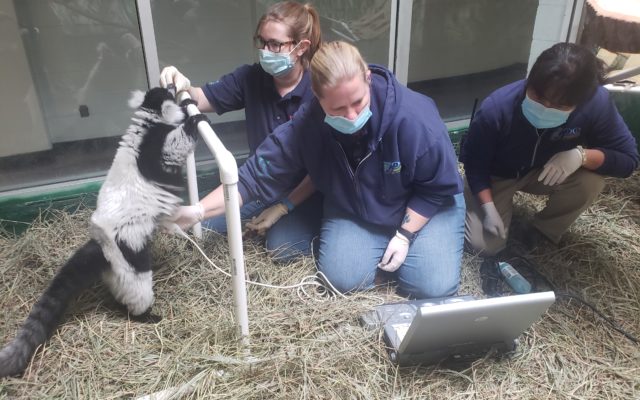 It has been a really active past nine months for animal babies at the Topeka Zoo and Conservation center. People anticipated, watched and celebrated the births of two giraffes, four Sumatran tigers, a three-banded armadillo, a Hoffman’s sloth and a golden lion tamarin. Now through a series of ultrasound exams of a female black and white ruffed lemur, the Zoo is confirming the pregnancy of its female, Cleo.

“Maybe there’s something in the water or maybe it’s just really good animal care,” said Zoo Director Brendan Wiley. “Like with so many of the animals that live here, our lemurs participate in a cooperative animal training program that benefits their health. Our female lemur voluntarily participates in ultrasound exams. This training has allowed us to confirm one and possibly a second baby. We can only see into the part of the uterus that Cleo allows us to see. This is one of the reasons that we repeat the sonogram on the same day in consecutive weeks.”

The Zoo estimates that the female lemur is in the latter part of her third trimester. Gestation of this species is approximately 102 days. In North America, they typically give birth in either April or May. As part of the planning for the imminent birth, visitors to the zoo will see a thick layer of hay bedding and a new nest box on the floor in the lemur habitat. Zoo staff plan to continue the voluntary ultrasounds until parturition occurs.