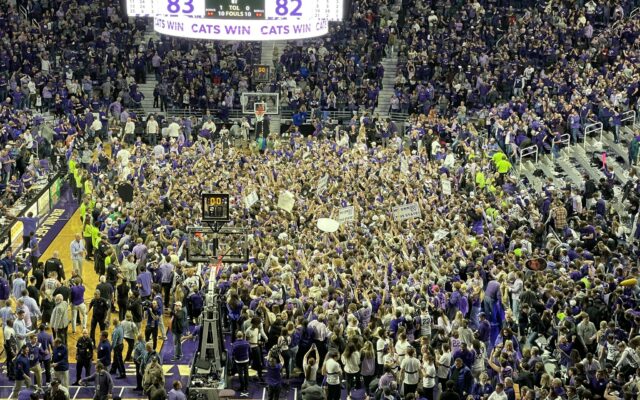 With the eyes of the college basketball world directed towards the Flint Hills, the first edition of the Sunflower Showdown on the hardwood for 2023 did not disappoint.

And while the ending on Tuesday night at Bramlage Coliseum – a Kansas State win over their in-state rivals from Kansas – hasn’t been a familiar one in the series’ recent history, the way the Wildcats sealed their 83-82 overtime win provided a feeling of déjà vu to anyone following K-State’s surprising run to the top of the Big 12 standings.

For the second time in as many home games, a Markquis Nowell-to-Keyontae Johnson alley-oop proved to be decisive, with Johnson’s finish over Jalen Wilson with 25 seconds to play providing the game’s final points and moving the Wildcats into a tie for first place in the conference along with Kansas and Iowa State.

Markquis Nowell with the alley, Keyontae Johnson with the oop, #KStateMBB with another thrilling home victory pic.twitter.com/6OG63mVjqf

“It’s something that we run, it’s what we were looking for,” said Kansas State head coach Jerome Tang. “We wanted to isolate (Johnson) and knew they’d be on top of him.”

“It was a great call,” Kansas head coach Bill Self said after the game of the winning play. “I can’t believe it was available. That’s one possession I certainly wish we could take back.”

With a rowdy student section providing the soundtrack, K-State came out firing in the first half, sinking their first four three-point attempts and building a 14-point lead of 33-19. The Jayhawks responded with an 11-2 run, and closed the gap to as little as two points before a late basket from Johnson nudged the lead to 44-39 at the intermission. Both teams shot it well in the first 20 minutes, with KU sinking half of their 30 field goal attempts while K-State made 15 of their 29 shots. Threes and free throws were a separator for the Wildcats, as they hit on five of nine first-half triples and went 9-10 from the line while the Jayhawks were just 3-12 from deep and 6-8 at the charity stripe.

An Ish Massoud three and a Desi Sills strip and score allowed K-State to build a nine-point advantage, 51-42, before the under-16 media timeout. But the Jayhawks, winners of the previous seven and 15 of the previous 16 meetings in the rivalry heading into Tuesday night, wouldn’t go away. They took their first lead of the second half at 58-57 on a pair of Wilson free throws with 8:40 to play, part of an 8-0 run in which the Jayhawks held K-State scoreless for nearly four minutes. The Wildcats responded with a 7-2 run to go up five, 66-61, with 5:17 left, but KU tied it up two minutes later and the two teams traded hoops and free throws through a tense final sequence in regulation. Nowell, held to just four points on the night, tied the game at 72 after a steal and layup with just over a minute to play, but missed a wide-open three at the top of the key with 30 seconds left. K-State forced a turnover on the ensuing KU possession, leading to one last chance for Johnson, who couldn’t get a contested layup to fall as time wound down.

The overtime was even more back-and-forth. A pair of Wilson free throws gave KU a two-point edge, 82-80, with 1:18 to play. Johnson split a pair of free throws at the other end with 1:06 left to halve the deficit. On the next Jayhawk possession, Self called a timeout late in the possession as Wilson was in the process of loading up a deep three-pointer that went in. Instead of having an 85-81 lead, KU didn’t score out of the timeout, setting the stage for Nowell and Johnson’s game-winning connection on the other end. Kansas had one last chance to regain the lead, but Dajuan Harris slipped on a drive and lost the ball and Johnson batted the loose ball skyward out of danger as the buzzer sounded, touching off a court-storming at Bramlage.

If Tang has his way, that will be the last one. “We told you we’d get you one court-storming,” Tang told the crowd over the PA as he stood atop the scorers table, the throng of students roaring at his feet. “From here on out… expect to win!”

“We got you one court storming. From here on out, EXPECT to win.” — #KStateMBB coach Jerome Tang pic.twitter.com/8CvLzBkB9W

Tang elaborated on his impromptu remarks in his postgame press conference, saying he was moved to do so after hearing the K-State students take part in an infamously profane chant about their rivals both before and immediately after the game. “We don’t have to degrade the other team… let America hear Kansas State and not the other name. That’s all that’s about. We can have a terrific culture here because of the passion of our fans.”

“Coach Tang gives you the confidence to win every game,” Nowell said. “Throughout the game you try to stay the course and stay focused, but once the final buzzer hit I was happy, just knowing the journey. Tang has elevated the program and it’s gonna get even better.”

Wilson led all scorers for Kansas (16-2, 5-1 Big 12) with a career-high 38 points in a losing effort. He was joined in double-figures for the Jayhawks by KJ Adams, who had 17 points before fouling out late in regulation. Adams, Kevin McCullar, and Gradey Dick all fouled out for KU in the game.

“We did enough stuff to put us in position to win,” Self said after the game. “I’m proud of our guys, I thought we fought hard. We had a makeshift lineup at the end, but that’s not an excuse. We gotta do a little bit better and I gotta do a better job.”

When asked after the game what statement the victory made, Johnson said, “We’re one of the toughest teams out there. We have fun together, celebrate each other, and play with a lot of confidence.”

Both K-State and KU are on their respective home floors on Saturday, with the Wildcats welcoming Texas Tech to Manhattan while the Jayhawks tussle with #14 TCU in Lawrence.