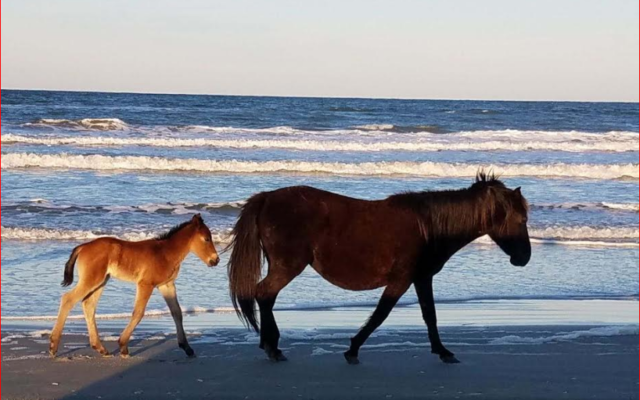 Colonial Spanish Mustangs near Corolla, North Carolina, are one of only two herds of the breed in the wild.

“We haven’t determined gender of the foal, but are pleased that both mom and baby are in good condition,” added Meg Puckett, herd manager.

“The foal was named Renzi after Melissa Renzi who recently first visited the Outer Banks celebrating her birthday,” Langone said.

“Melissa suffers from terminal illness and has been in hospice care since 2017,” Puckett pointed out. “Seeing the wild horses of Corolla was on her bucket list. With help of friends and community, that dream came true on the same weekend the new baby was born.”

“It seemed only fitting to name the foal after Melissa, who is endlessly upbeat, strong, and kind. Traits the Banker horses share with her,” Langone insisted.

“On the Currituck Outer Banks, these mustangs are one of only two herds of the threatened wild breed,” Puckett reiterated.

The others live on Shackleford Banks of the Cape Lookout National Seashore in Carteret County near Harkers Island, North Carolina.

“Referred to as Banker horses, they were brought to the barrier islands by Spanish explorers in the 16th century,” Langone explained.

About 115 mustangs now roam on 7,500 acres north of the paved North Route 12, near Corolla, North Carolina. “They are responsibly and humanely managed by the Corolla Wild Horse Fund,” Puckett said.

It is conducted under the auspices of the Humane Society of the United States and the Science and Conservation Center in Billings, Montana, she verified.

“PZP is administered annually as the least invasive method of delivery and most humane way to control population,” Puckett said.

Mares under four years of age, those older than 15 and mares foaling at least once are darted annually.

“This is an effort to reduce inbreeding, and improve the long term health of the mares,” Puckett detailed. “It helps maintain a sustainable population of horses.”

There are usually around six births per year Corolla, but a larger crop of foals is anticipated this year. “That will offset an aging population and the deaths and removals of horses in 2018,” Langone said.

The herd is maintained at between 110-120 individuals.

Mission of the Corolla Wild Horse Fund is to protect, conserve, and manage the herd of wild Colonial Spanish Mustangs.

“We intend to promote the continued preservation of this land as a permanent sanctuary for horses,” Langone said. “Designated as the State Horse, the mustangs are defined as a cultural treasure by the state of North Carolina.”

Every individual horse is different. However, the Colonial Spanish Mustang breed has been characterized by the American Livestock Breeds Conservancy. They are “renowned for their even temperament and gentle dispositions.”

“These horses descended from the fine horses of Spanish conquistadors,” Langone said. “Colonial Spanish Mustangs were brought to the New World from Spain, as well as the West Indies and South America.”

Spanish exploration was approved and funded by the country’s king and queen, so the finest stallions and mares were shipped. By 1500, large breeding ranches had been established to produce the best horses of that time.

“The horses of rulers and nobility were a mixture of Spanish Barb, Arabian and Andalusian blood,” Langone said.

Three main theories exist as to how the horses ended up in North Carolina.

One is that as ships wrecked and sank, the strongest horses aboard may have swam to the barrier islands.

Another is that as some ships hit dangerous sandbars, they could no longer float. Excess weight had to be pushed overboard, including animals.

The third is that horses were left behind when colonies were abandoned due to American Indian disputes or devastating illnesses.

“Regardless of how the horses got here, they are an iconic part of both the state’s and America’s heritage,” Langone insisted.

Both the Shackleford and Corolla herds are registered Colonial Spanish Mustangs.

“Their small numbers have them on the critical list of the American Livestock Breed Conservancy and Equus Survival Trust,” Langone said. “Both national groups work to save endangered breeds of livestock. The next category is extinction.”

The herd must also be maintained at a size of no less than 120 horses to keep it genetically healthy.

Headquartered near the Corolla, North Carolina, Visitors Center, the Corolla Wild Horse Fund has an education center and gift shop.

“Visitors are welcomed year around with activities during the summer, including opportunities to meet a gentled Spanish Mustang,” Langone said.

Information can be found at www.corollawildhorses.org or by calling 252-453-8002.