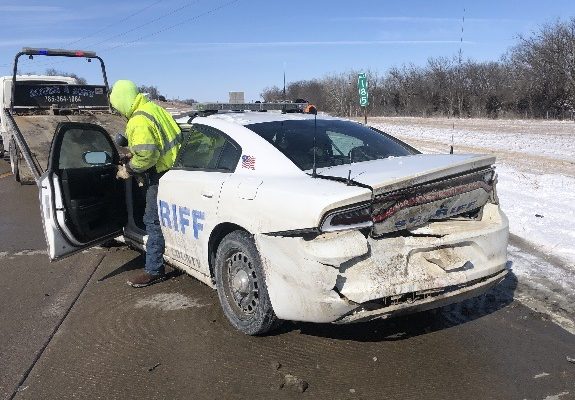 A Jackson County sheriff’s deputy’s vehicle was hit Sunday afternoon on Highway 75 while the officer was investigating another accident.

The officer was called out around 1 p.m. to the highway north of 198th Road. The original accident involved a 2016 Ram 1500 pickup driven by 33-year-old Michelle Holmes of Council Bluffs, Iowa that had been in the passing lane and merged in front of a 2016 Volvo semi tractor and trailer driven by 40-year-old Ryan Love of Clarksville, Tennessee. Holmes was taken to Holton Community Hospital with non-life-threatening injuries.

The deputy saw a 2000 Ford Taurus coming and took cover along with the semi driver when 17-year-old Emily R. Howard of Topeka rear-ended the patrol car. Howard was taken to Holton Community Hospital with non-life-threatening injuries.

No one else at the scene was hurt. The Kansas Highway Patrol is investigating the second wreck.