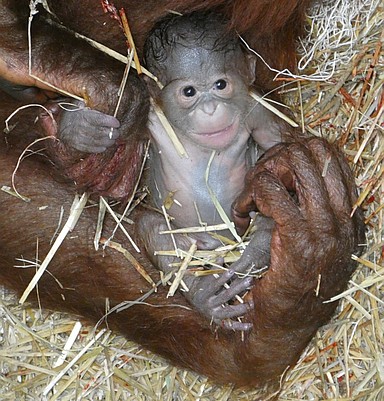 After the birth occurred, the facility where the orangutans live was closed to allow for private bonding time between mom and infant.

Both the infant and mother appear to be doing well.

Both are anticipated to be able to be viewed by the public beginning on Mother’s Day.

The gender of the infant is not known yet.

This infant is her third.

Rayma, her first, was born in 2005 and currently lives at the Phoenix Zoo.

Bumi, her second, was born in 2013 and still lives at the Topeka Zoo.

He was born at the Lincoln Park Zoo in Chicago and moved to the Topeka Zoo in 2004.

Bornean orangutans are critically endangered and found only on the island of Borneo in Southeast Asia.

The Topeka Zoo is an active participant in the orangutan Species Survival Program.

Details regarding how the infant will be named and its gender revealed will follow in the next few days.